Plot Development
This is the second post about the children's book I am creating titled 'Catch that Fly.' I will be writing about every step of the process and all the resources I use along the way so you too can create your own book.
I have my idea and a rough plan as to what will happen in my plot. Now it’s time to develop my story. I decided to base it on a family ready to eat their dinner when they are suddenly interrupted by a fly in the house. They all try and catch the fly different ways then let the fly out the window at the end. I will have them knock something over or hit something while trying to catch the fly so at the end of the book they are left with a great big mess.
Firstly I developed my characters. I decided to go with a family of five plus a dog and a cat who will also try and catch the fly. I decided the main characters will be Mum and the youngest child Ben. So I have 7 characters plus the fly.
Mum
Dad
Jess
Sam
Ben
Puss
Rex
I decided the plot would go something like the below.
Mum and Ben are setting the table for dinner.
Mum yells 'Dinner time.' The family come running.
Then they notice the buzzing of the fly. Mum yells everyone catch that fly.
Jess tries to catch it by clapping her hands and knocks over the gravy.
Sam tries to catch it with his shoe and leaves a mark on the wall.
Dad tries to catch with his newspaper and spills the peas.
Mum tries to catch it with a fly swat and falls over with the plates.
Puss tries to catch it with her paw and gets the chicken.
Rex tries to catch it with his jaws but lands on the potatoes.
The fly buzzes over the dishes and under the table.
Then Ben opens the window and the fly flies outside.
The family sit down to dinner in a mess.
I have 12 spreads to tell my story with as my book will be 32 pages once printed. My plot is clearly separated to suit this. Obviously there will be lots of changes at this stage.
Manuscript Assessment

I wrote my first draft of the story as best as I could. I then created some rough illustrations to accompany the text. This is not usually necessary at this stage however as I had written the text with the pictures in mind I decided they were important in telling the story. I had many people read over it and give me feedback. Once I was happy with it I sent it to a manuscript assessor who had the following comments.
The fly needs to be visible from the start of the book so that it’s clear that something is about to go wrong with their perfect dinner. Also it needs to be clearly understood why the fly is a problem. Maybe Mum could say something like 'Don't let that fly land on our dinner.'
Why must the dinner be perfect? Is there a reason mum wants everything to be just right tonight?
There needs to be more variety in the scenes where the family are trying to catch the fly. What is the fly trying to land on? Will it succeed or will the family catch it?
I will describe how I solve these problems in my next post. Subscribe to make sure you don't miss any important information.
Posted by amyburrell at 7:57 PM

Check out the Book! 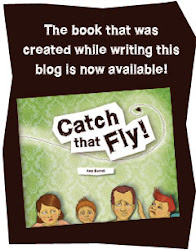 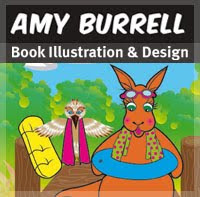